At last the first successful driving on trike today has taken place. After last change of a configuration of a chainline to twist pedals became easily and silently
Yesterday, just at the first brake left disk was jummed . It happened because of the fact that the left kaliper was installed incorrectly. And it because I did not take into account that the kaliper working surface deployed at 45 degrees to the mounting. Therefore, the right kaliper been installed without problems, but the left was able to attach to only one bolt (for testing)... I had to remove the front left disc and therefore front brakes did not work. It was found that the brake only the rear brake is ineffective and even dangerous at high speeds. When you try to stop at the speed of the rear brake Trike starting slidin rear axis and a great chance of overturning. 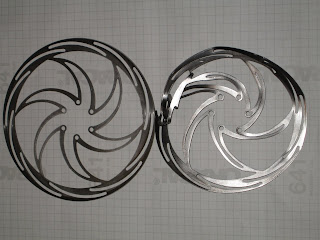 Added later:
In practice it was found out that the effort which is applied by a back suspension bracket on a back pipe is compensated by that effort which renders an armchair.Also established ammo the low shift and a back suspension bracket has very much is very seldom compressed so that the children's armchair concerns wheels. But sometimes all the same concerns. Therefore the children's armchair will be mounted on another way. While I think, how it is better to make it.PS I at a stage scetching had fears that trike with the child sitting behind will be very unstable. It has in practice appeared that no problems with stability are present. 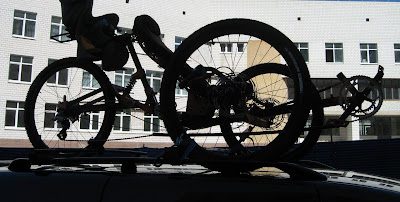